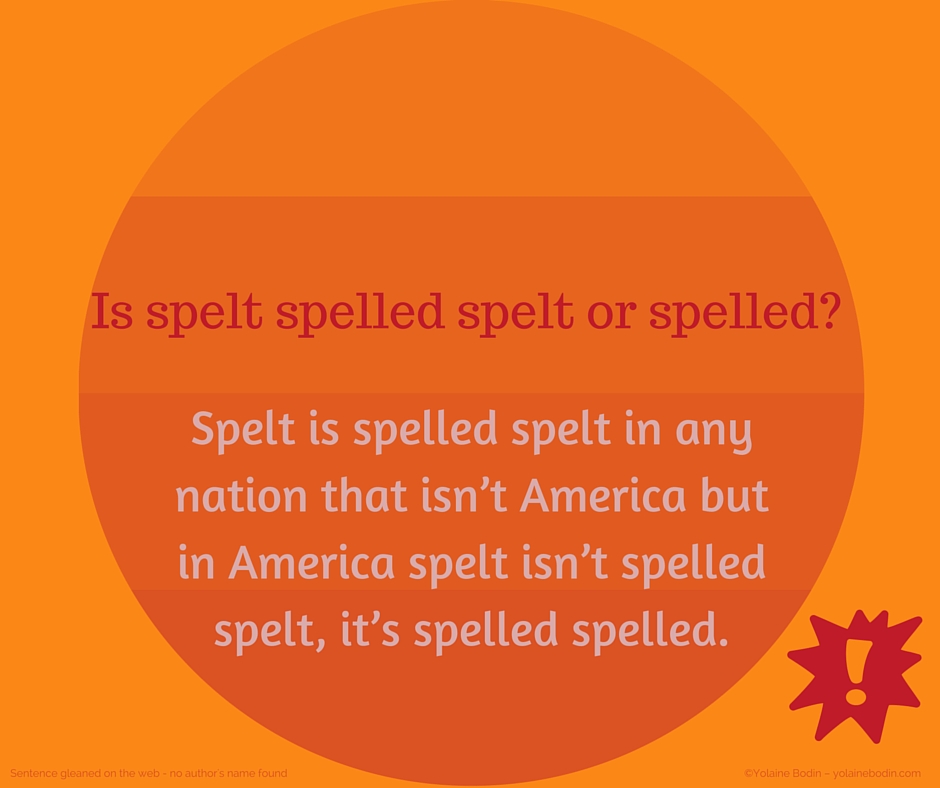 Is spelt spelled spelt or spelled? English verbs that are irregular and regular

Every learner of English needs to learn the irregular verbs. There are several hundreds of them (some say there are over 400, others over 600), but there are about 200 commonly used ones. These 200 irregular verbs only represent a small fraction of all English verbs. However small that fraction may be, it cannot be brushed aside or dismissed since a great part of these verbs happen to be very frequently used verbs.

Is that so? Absolutely! Let’s look at a few of them:

Clearly, there is no way you can have a single conversation without using at least one of these verbs! So, there’s no escape if you are learning English: you will have to learn them! And to do so, you will most of the time refer to a list. That is normal and that is fine. 🙂

However, have you ever compared several lists of irregular verbs and noticed that from time to time, you fall upon a list that provides two different ways of spelling the past forms of a given verb? For instance, incidentally, the verb to spell: you will sometimes find “to spell, spelt, spelt” and some other times “to spell, spelt/spelled, spelt/spelled”. This means that the verb is both regular and irregular. Usually, that’s precisely when you start wondering why and which spelling you should choose and use.

The funny answer to that is the sentence you can read on the picture above (I gleaned the sentence on the web but could not find any author’s name):

Is spelt spelled spelt or spelled?

Initially, or rather traditionally –hence in British English– to spell is an irregular verb, but both spellings spelt and spelled are widely accepted, except in the United States where it is considered a regular verb, with its past form in -ed. Indeed, Americans will write spelled, spelled. Because of the meaning of the verb, the sentence about how to spell spelt–or spelled– works as a play on words or a tongue twister.

Beware! Spell is not the only verb that can be used both as a regular and an irregular verb. There are other verbs that are “traditionally” regarded as irregular verbs but that also take the regular -ed ending, very likely because of the growing influence of American English. I haven’t found a complete list but here are some of them:

Don’t panic! Such differences are good news actually since they are the sign that the regular form of some irregular verbs is becoming more widely accepted and used.

If we look at how frequently the irregular and the regular -ed forms of these verbs are used in British and American books over the centuries, we can see that the -ed form is being used more and more whilst the irregular forms are becoming less and less used. Thus, the more traditional British use of irregular forms is giving way to the -ed forms, even in British books. Although this trend seems to be quite recent for the forms of the verb to spell which are more and more often spelt (!) spelled, especially since the 1980’s, it is interesting to note that in the United States, the use of the -ed forms started to increase in the decades following the 1828 publication of Noah Webster’s first dictionary of American English.

So, if you were dreaming of a shorter list of irregular verbs to learn, you have to be thankful to Mr Webster whose name has become a synonym of the word dictionary in the United States! 😉

← Lieu, endroit or place: 3 commonly confused words Play on words - The past, the present and the future walked into a bar... →