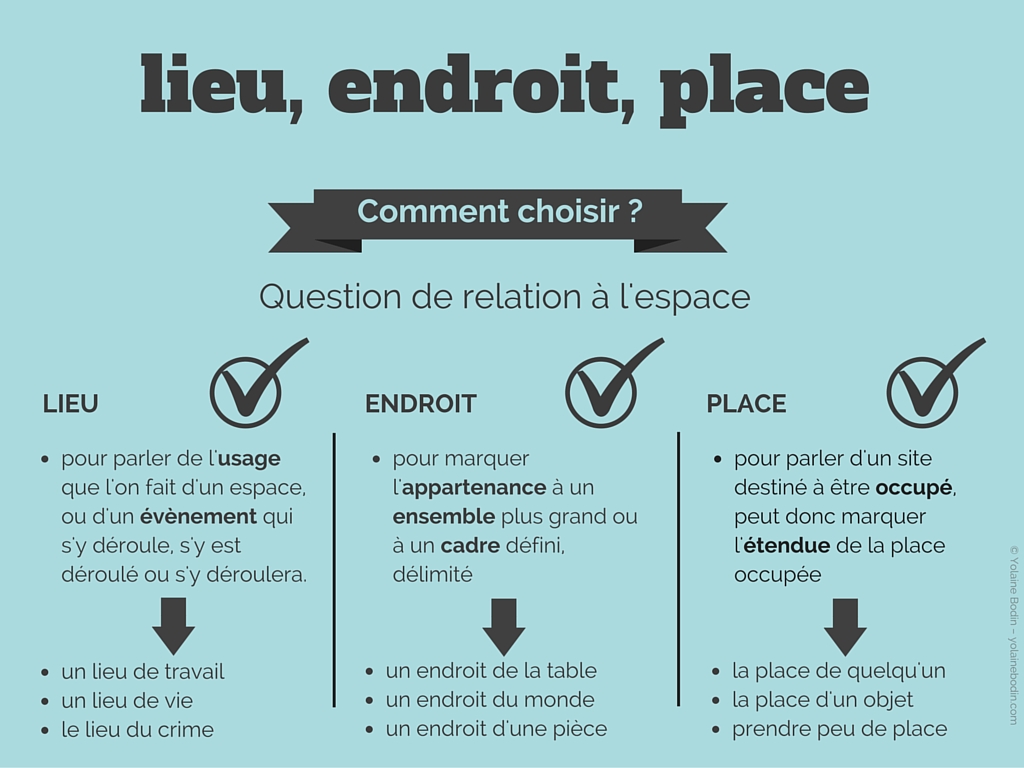 Lieu, endroit or place? If you are learning French, it isn’t always easy to choose which of these three words to use. They are often confused and the confusion also depends on your mother tongue. Yet, in French, these three words are quite distinct, so you need to know which one to use. How?
It’s all a question of how you think about space!

We use the word lieu to refer to what use we make of a space, or to talk about an event that takes place.

If you are referring to the space where you work for example, you can say it is your “lieu de travail”.
If an event like a crime for example happened there, you will talk about the scene of the crime ; in that case, in French you will say “le lieu du crime”. Actually, to say that something takes place, in French you use the phrase “avoir lieu”. Of course, this is true whatever tense you want to use: present, past or future… Another example of an important event in your life is your birth. So, when you have paperwork to do and forms to complete, you usually need to give your place of birth, i.e. your “lieu de naissance”.

We use the word endroit to refer to a definite or limited space belonging to a greater part or whole.

For instance, you could say that at home, there is a sunny spot in your sitting room: the limited space that the sun reaches in a greater part, the latter being your home. In French, that would be: “Chez moi, il y a un endroit dans mon salon qui est toujours bien ensoleillé.” Also, if you visit a new city and would like to know where you can find the market, you can ask “à quel endroit” it is ; that’s because the market is a limited space within the city, the city being the greater part.

Finally, we use the word place to show the extent of an occupied space and to talk about a site intended to be occupied. Thus, you can say:

One last point to remember: the words “lieu” and “endroit” are masculine – you say “un lieu” and “un endroit”-, but “place” is a feminine noun, so you say “une place” or “de la place”.

There you are! Now you know how to choose between the words lieu, endroit and place. Use them as often as possible so you can get a lot of practice!

← When the letter h remains silent... Is spelt spelled spelt or spelled? English verbs that are irregular and regular →