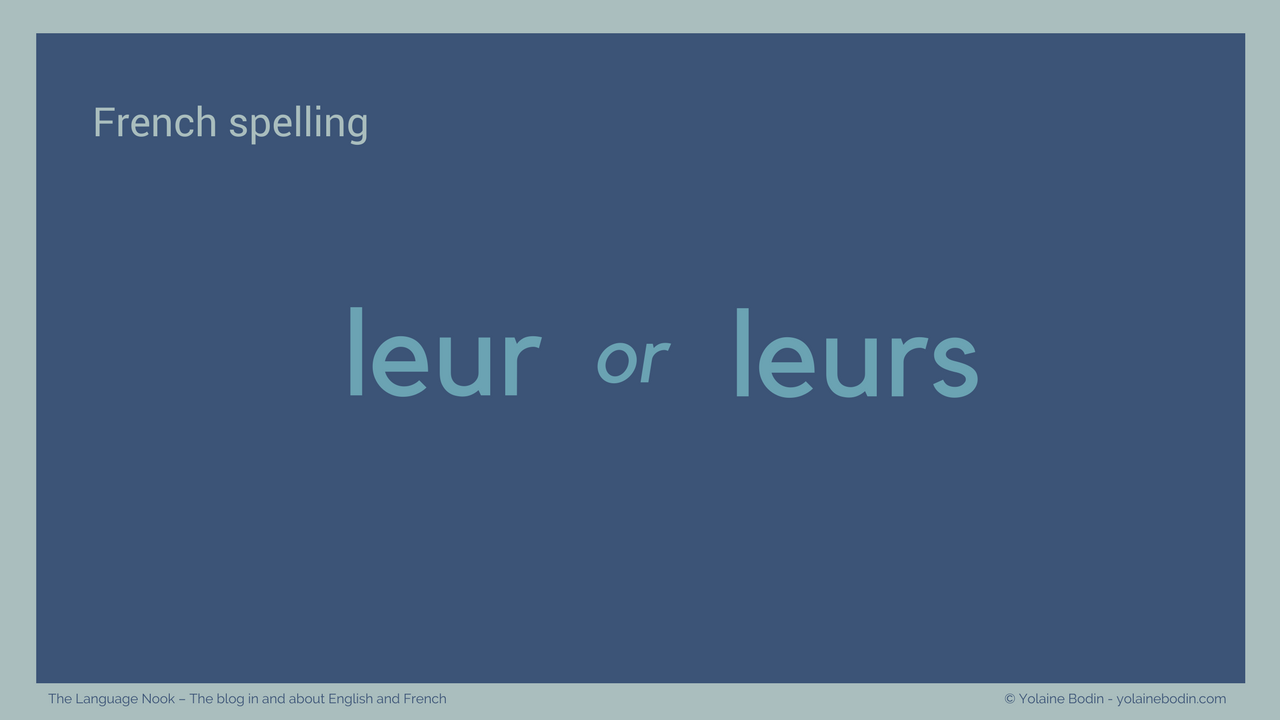 How do you know if you should spell leur without an s or leurs with an s?

Here is a question I am often asked not only in my French language classes but also in my French writing classes for French natives.

To be sure to get to grips with the logic and the reasons behind the choice you have whether to add an s or leave it out, it is important to understand what this short word means.
It is only a question of spelling because leur and leurs usually sound exactly the same when you speak the words, except in some cases… but we will come to that a little further down. 🙂

You will also find a visual aid below that summarises useful tips and that you can use as a quick reminder.

More explanations are useful though to better understand the difference between leur and leurs.

Leur belongs to two categories of words – grammatically speaking: it can be a personal pronoun (= them) or a possessive adjective (= their).

Leur as a personal pronoun = them :

Here, leur is the plural form of “lui” (= to him, to her), and is an indirect personal pronoun.

In the plural, “lui” becomes leur, whether feminine or masculine:

As you may have noticed from the above examples, as a pronoun, the spelling of leur never changes and never takes an s.

Leur as a possessive adjective = their:

It is as a possessive adjective that the spelling of leur can change and may need a final s.

Here, leur means “their” (i.e. belonging to them). It is used to indicate there are several possessors. This is where you have to be careful depending on your own language because the way we determine whether it is plural or singular is different in various languages, and different from the way it works in English.
Indeed, the possessive adjective will vary in French according to the gender of the possessed item. If the thing possessed in masculine, feminine, singular or plural will determine which possessive adjective to use.

Let’s look at these examples:

Leur makes no distinction between the feminine and the masculine. That’s rare enough in French to be noted! 😉

As you already know, in French, adjectives can be singular or plural depending on the number of the thing they describe. In the plural, you usually have to add an s.
The rule is exactly the same for leur and that is precisely when you need to spell leurs with an s.

Let’s look at the previous examples with the dog and the car again. Now imagine the possessors have several dogs and several cars. The words chiens and voitures will be plural, spelt with a final s. As a consequence, you will also need to spell leurs with an s:

Here is a visual aid with useful tips to help you choose between leur and leurs: 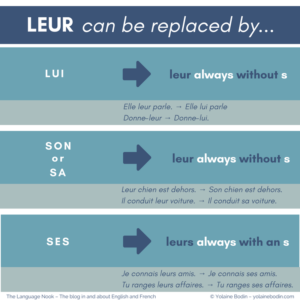 Careful! Remember that leur and leurs have the same pronunciation. Yet, as I mentioned further up, there can be exceptions. (I know, all my students always tell me French is just but a list of exceptions!) 😉
What does it mean? You won’t usually hear the difference between leur and leurs because the final s is silent, except if the following word begins with a vowel or a silent h.
In such a case, you need to link the words with a [z] sound:

Here you are! You are now an expert in the spelling of leur and leurs. If you see people get it wrong, you will be able to leur expliquer the difference! Congratulations! 😀

← Subject position altogether or all together? →