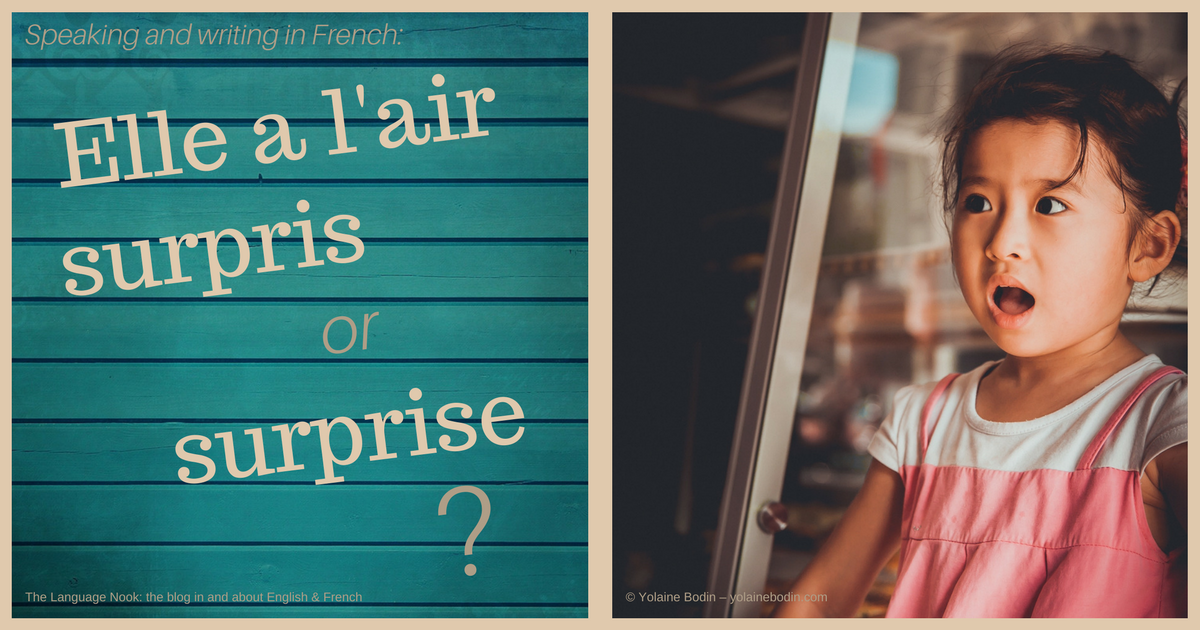 Avoir l’air is a common phrase in French that means to seem, to appear, to look or sound. It is often followed by an adjective.

Thus, to say “he looks surprised”, you can say il a l’air surpris. So far so good!

What is the correct spelling in the following sentences:

You already know there are agreement rules when you use French adjectives. But in this case, the question is: should you agree with the subject she –feminine form– or with the noun air –masculine form–?

The adjective agreement after the phrase avoir l’air is a bit special.

If the subject is an object, something inanimate, then the agreement will always need to be with the subject, i.e. the object. So, if the gender of the object is feminine, as in une table (a table) for example, then you’ll choose the feminine form of the adjective:

If the subject is a person though, an animate being or something comparable to a person, then you will choose to agree with the subject or with the noun, depending on the meaning you want to focus on.

When avoir l’air means to appear, to seem and can be replaced by the French verb sembler as in “Il semble fatigué.”, then the agreement is with the subject→ “Il a l’air fatigué.” (He looks tired.)
Try switching from sembler to avoir l’air, you will use the same endings:

So every time you will use avoir l’air this way, follow the same technique. Thus you will write: “Elle a l’air fatiguée.”

Easy, isn’t it? However, there is another option: if you use the phrase avoir l’air with a focus on the word air, meaning to have a facial expression, a look, an aspect, then the agreement will be with the noun air and hence you will need to use the masculine form of the adjective even if the subject of the sentence is feminine.

In this case you will get a sentence spelt this way: Elle a l’air fatigué. Here, we really want to say she has a tired expression on her face, we focus more on that than on the fact that she just “seems” tired. I know it is subtle, but with practice, you end up getting a feel for it.

If we look at the photo at the top of the page, then we can conclude that both spellings are correct. The difference lies in what we choose to focus on:

Careful! The agreement is always with the noun air when the phrase avoir l’air is followed by a complement. Look at this example:

There you are! You know know how to spell the adjective you want to use after the phrase avoir l’air. Congratulations! 🙂