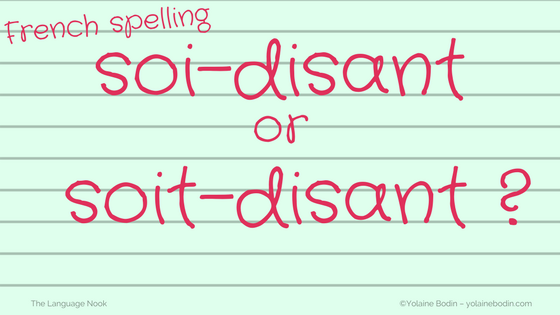 In French, is it “soi-disant” or “soit-disant”? Getting the spelling and meaning right

Let’s say it straight away: soit-disant with a t at the end of the first word simply does not exist! The correct spelling is soi-disant.

Right, but what does it mean?

In French, soi-disant can be both an adjective and an adverb.

If you are learning French, you already know that one of the characteristics of the French language is the number of exceptions you have to put up with. It seems there is an exception to every rule! 😮

Well, soi-disant as an adjective is one of them! But you might like this one because it is an invariable adjective. It means you will never have to worry about a feminine or plural form. Whatever noun you use it with, the spelling of soi-disant will never change!

Soi-disant can also be used as an adverb to mean supposedly.

In colloquial French, you can also use the phrase soi-disant que to mean apparently, it seems that –with a hint of disbelief– on the pretext that.

There you are! You now know how to spell soi-disant correctly in French and when to use it. Congratulations! 🙂

← Idioms: know like the back of your hand & connaître comme sa poche What's the difference between small and little? →