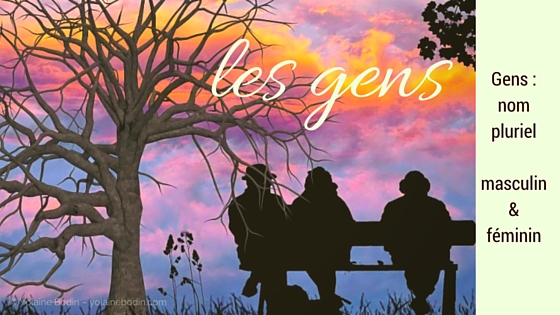 Gens: a noun that can be both masculine and feminine

Les gens: people talk, are talked about, they are all around us, they are everybody else but we are people, too.

In this article, you are going to crack the secret about this very special word.

So, what’s so special about people, or rather about the French word gens?

Gens is a hermaphroditic word. It is a noun that is always used in the plural form and that can be sometimes feminine, sometimes masculine.

Gens is always plural and is used to talk about an unspecified number of people. In the singular, you need to say “une personne”.

You have learnt that all nouns in the French language are either feminine or masculine. Well, that is true, but gens is so very special that it varies in gender.

In most cases, it is masculine:

Careful! Only the adjectives before gens take the feminine form. Everything that comes after the word gens remains in the masculine form:

Careful again! If you reverse the order of the different clauses of your sentence, the clause that was initially to be placed after the word gens but that you decided to put at the beginning of the sentence to improve its style, will remain in the masculine form:

Careful once more! When the adjective placed immediately before gens has the same form in the feminine and in the masculine, then you must use the masculine form:

What happens if you need several adjectives among which some have the same form as the masculine but others don’t?
In such a case, make all the adjective agree in the same way as the adjective closest to the word gens:

There you are! You have now cracked the secret of the double gender of the word gens. Congratulations!  🙂

← Do you enjoy doing nothing when on holiday? Learn 10 ways to say you do nothing in French Near or near to? →