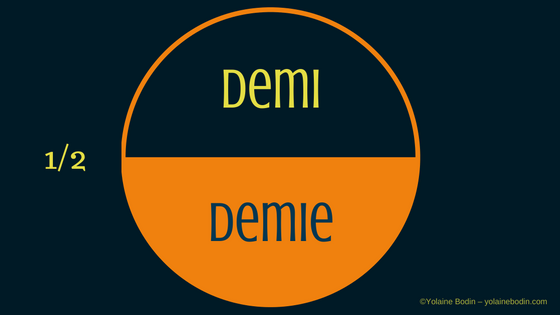 If you have already stumbled over the spelling of demi and wondered if you should sometimes add a final e to get demie or not, be assured you are not the only one, especially since it is a question even many French natives don’t always have the answer to.

Although the French language and French spelling may be difficult at times, fortunately, the rule for spelling demi or demie is very easy. Celebrate! 😉

Remember that when demi is placed in front of the word it is connected to, its spelling never varies. You will always write demi; imagine, you don’t even have to ponder over the gender of the word!

All you have to do is add a hyphen between the two words:

As you can see, whether the word it goes with is feminine, masculine, singular or plural has no impact at all on the spelling of demi.

Demi can only vary if it is placed after the noun it goes with, and the agreement is only with the gender. This means you will never have to add the s for the plural.  Thus, the only other possible spelling is demie with a final e if the noun is feminine. So, with masculine nouns, you will spell demi:

With feminine nouns, you will spell demie – as long as it comes after the noun:

Now that you understand this rule, you may wish to celebrate with un demi, i.e. a glass of beer! Un demi is a bit less than half a pint, more precisely, it is a 25 cl glass of beer. If you have a friend celebrating with you, you will order deux demis. That is the only instance where demi will take an s for the plural form.