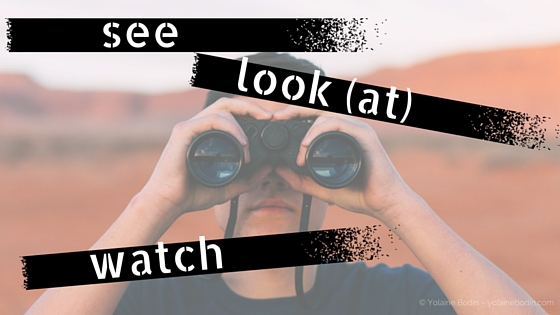 See, watch and look (at): what’s the difference?

As a learner of English as a foreign language, it is not always easy to choose between the three verbs see, watch and look (at).
It is usually well understood that there is a difference but it is not that easy to be sure which word should be used. These verbs are all the more easily confused depending on our mother tongue, mainly because some languages use the same verb for both look (at) and watch for example.

So, how can we tell the difference and when should we use see, watch or look (at)?

See is the English word to use when we want to talk about what image is captured by our eyes. It is not always intentional. Our eyes are open and see something. It is not necessarily a deliberate action.

Look (at), unlike see, is intentional: we use look (at) when we are paying attention.

Watch is also intentional, but is used when there’s an event, or something comparable to an event that is happening. It is used when we pay attention to something and focus on it:

However, there are types of event where it is more common to use the verb see rather than watch. These are event like public performances:

The question is actually where you are when you watch or see the performance in question. Films are a good example because that’s precisely where the confusion is most common and where many agree that the English language can be quite perplexing! Let’s look at these two examples:

Note that the verb see also has other meanings so it can be used in different ways. It can mean:

The verb look can be used on its own but we need to add the preposition at when it is followed by an object in the sentence. Compare:

Look can also be used with other prepositions (look for, look after), but let’s leave this on the side for a future post in the Language Nook.

There you are! You now know the difference between the English verbs see, look (at) and watch! 🙂

← What's the difference between the words ballade and balade? He who learns a new language acquires a new soul →