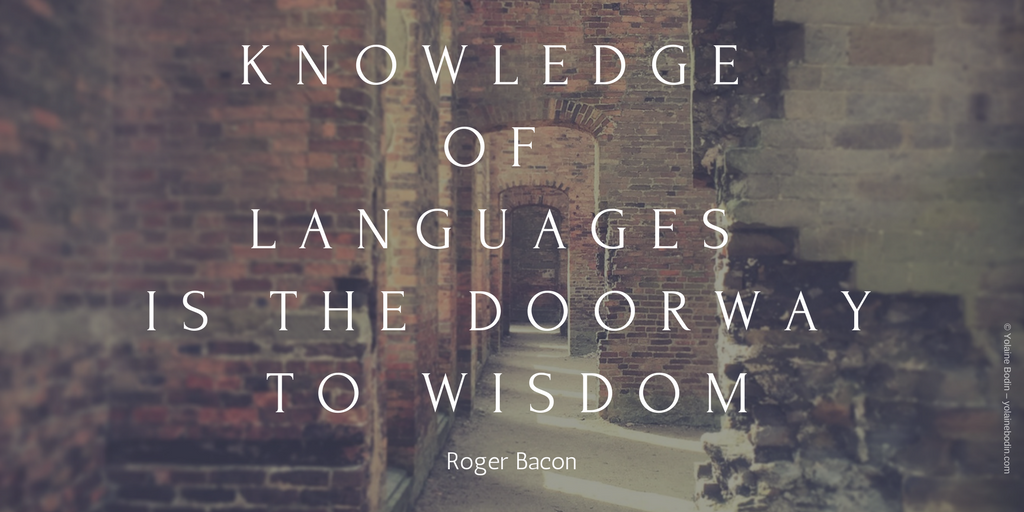 “Knowledge of languages is the doorway to wisdom”

Roger Bacon is credited with this quote  although I have to say I have not found what book it is taken from.

Roger Bacon was an English philosopher from the 13th Century who studied linguistics among many other things.
He was so scholarly that he was also called Doctor Mirabilis.

This quotation from Roger Bacon “Knowledge of languages is the doorway to wisdom” highlights the importance he gave to languages.

He learned quite a number of languages including Greek and Hebrew.

He firmly believed it is essential to learn several foreign languages. I couldn’t agree more!

Each new language brings new understandings and from this stance, it is easy to believe that it paves the way to more wisdom! Do you agree?

I like this quote because it brings together in a short sentence four words, hence four notions, that I feel are essential: knowledge – essential to life, languages essential in life, doorway essential throughout life, wisdom essential for life. 🙂

Related posts
Quote about learning another language by Flora Lewis
30 November 2019
Quote: By learning a new language, you suddenly…
1 February 2019
A quote by Paul Valery: “Translating is… ”
12 November 2018
Quote by C. Myss: “Every word is a universe unto itself.”
19 August 2018
A Quote by Anthony Burgess about Translation
10 March 2018
“A language is not just words…” Noam Chomsky
24 December 2017
Leave Comment